In this tutorial, we’ll take a look at Attributes in GameSalad.  Attributes are one of the most powerful aspects of GameSalad.  They are essentially value-holders; they’re designed to store numerical or text values to be used for different situations.  They can easily be used for anything from the angle at which a cannonball is launched to displaying the name of a character in a game to recording a rapidly-changing score.  Understanding how to use Attributes properly is crucial to unlocking the full power of GameSalad.
Check out the Attributes 101 tutorial on the GameSalad Academy.

Attributes are essentially variables.  Any time you need to record a number (or an angle, or a piece of text), creating a new attribute is probably the best way to do it.  If you’re struggling with this concept, focus on the numeric aspect of attributes.  For instance, say you’re building a racing game.  Creating an attribute to record the speed of your racer gives you the flexibility to easily change that speed in a way that can be referenced in a variety of situations, such as accelerating, braking, and collisions.  At the same time, another attribute might be used to record the amount of time it takes to go around the track, or your final score.

There are six different types of attributes:

Existing attributes in your game can be viewed in the backstage (in the Inspector, chose either the “Game” or “Scene” tab, and then the “attributes” tab below) and in the Actor editor (the left-hand side contains a list).  These existing attributes record data about your game, scene, and actors, such as their size, location, color, and more.  However, custom attributes contain data that is unique to your game – how fast your race car is moving, or how many blocks remain in a puzzle.  Simply click the “+” button at top right of any list of attributes, and rename as desired. 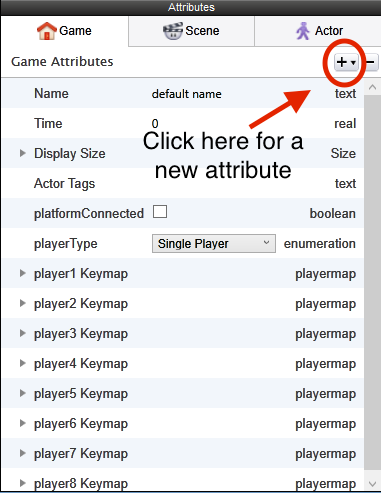 Because you’ll be accessing the value held by this attribute from actor behaviors, rename it something that makes sense to you and you’ll be able to remember later – such as “race car speed”, or “blocks remaining”.  At times, you’ll want to record the location of an actor – you can do this through attributes as well, and these attributes might be named something like “PlayerX” and “PlayerY”, to record the X and Y coordinates of the player.

To reference an attribute once you’ve created it, use the expression editor (“e”) or attribute browser (“…”) in any behavior.