Scenes are the building blocks of your game. They contain the objects of your game and provide an essential way to organize different sections of your game. For example, you may create a scene for the initial menu for the game, another for an individual game level, another to end the game, etc. You can use scenes to design and build your game in segments.

Scenes are containers for the objects (called “actors”) in your game. You can split each scene into layers (similar to many design programs, such as Photoshop or Illustrator). Layers provide another level of (visual) organization for your game, and they allow you to group objects within your scene and arrange them in front of or behind other layers/objects. For example, one layer may contain your background, another may contain all your labels, another may be for actors in your scene that the player can interact with, etc. To view or edit the scenes within your game, select the “scenes” button within your navigation menu.

To add a new scene, press the scenes tab in the Library and then press the ‘+’ button in the top right of the interface. To copy an existing scene, you can either hold down the Alt key and drag a copy of the existing scene to the desired location within the scene list, or highlight the scene you wish to copy, and use the standard shortcuts to copy/paste (Control+c to copy and Control+v to paste). To delete a scene, simply click it and press “Delete”, or the “-” button in the upper right of the interface.

The following attributes define each scene and are modifiable:

As we’ll discuss in more detail later, attributes are the values (numeric or text) relating to an object that are easily and rapidly changed at any point.  For instance, the positioning of the camera in a scene can be changed by altering the “camera origin” attributes, while the background color of the scene is alterable with the “color” attribute.

Several key behaviors affect which scene is currently active in your game. The foremost of these is the “Change Scene” behavior.

Select any scene in your game from the drop-down menu in this behavior. Generally, you’ll want this behavior in a rule stating some sort of precondition for changing the scene, such as an actor reaching a goal, or achieving a certain score.  When this behavior triggers, it’ll change the focus of the game to the selected scene, and reset the scene you were just in. You can also use “Change Scene” to return to a previous scene.
The Pause Game behavior functions similarly, but also has a few key differences. Instead of resetting the “current” scene, it simply pauses everything in it, and opens the selected scene.

Finally, we have the “Reset Scene” and “Reset Game” behaviors. The former will reset just the current scene and that scene’s attributes, while the latter will reset all scenes and attributes in the game.

One final element of the Scenes Editor that it’s useful to be aware of is the Camera controls. 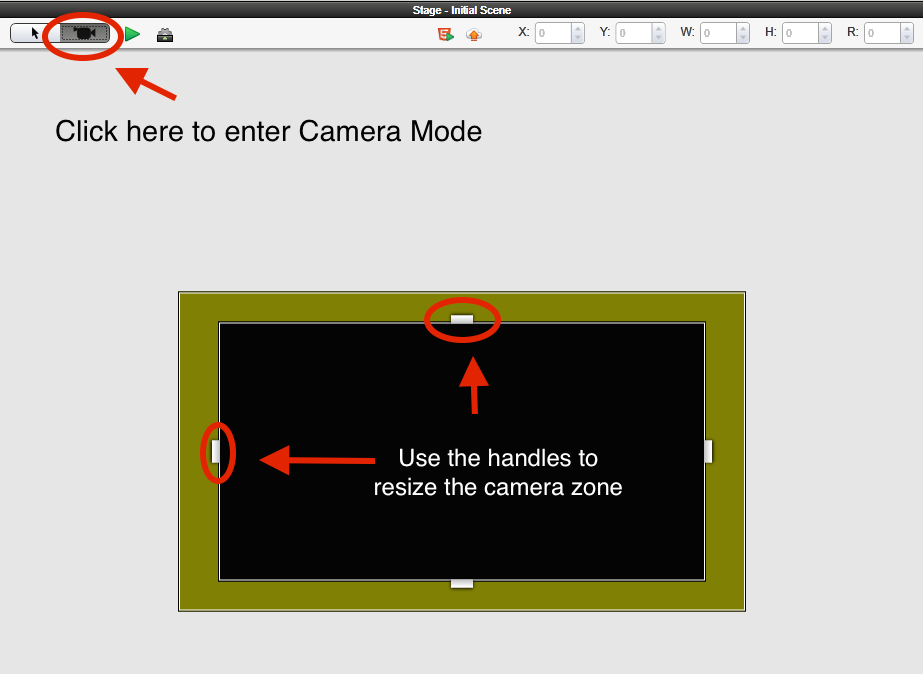 To return to scene editing mode, simply click the arrow to the left of the camera image.