2 – Adding achievements to your game

Once enabled you can set up leaderboards and achievements. Click the SETUP button for achievements. This will take you to the Achievement interface.

Next click the button at the top of the interface to ADD NEW ACHIEVEMENT.

On the next screen you will need to fill in a few fields: 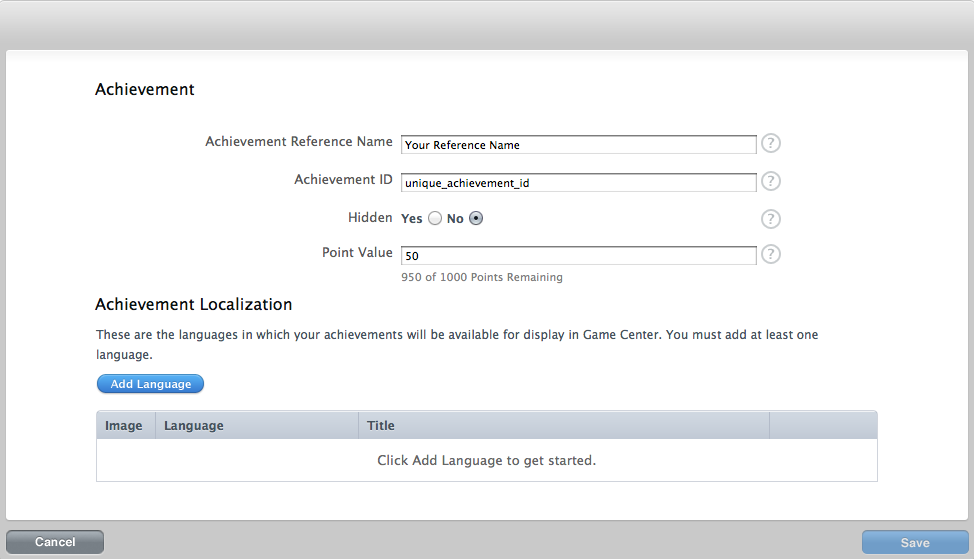 After you have set those values up click the ADD LANGUAGE button to set up the public facing values of your achievement. 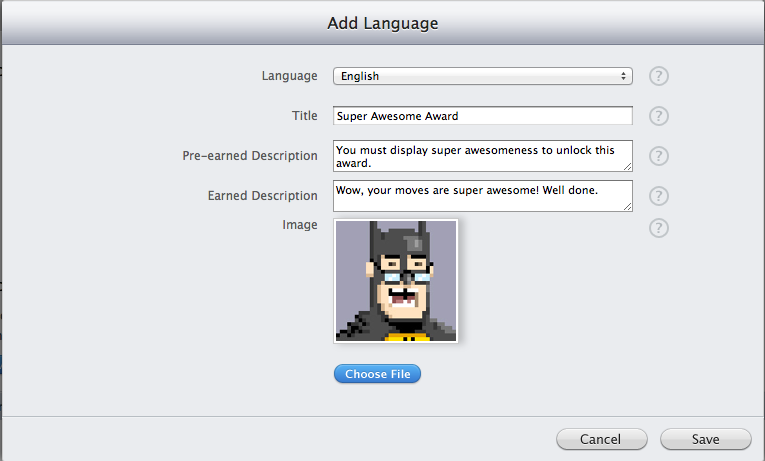 When you are finished click the SAVE button to close the window. You can then click SAVE in the main Achievement editing dialog to save your changes.

Repeat this process for all of your achievements, paying special attention to the Achievement ID field, as that will be your main sync point with GameSalad.

Now that you have set up your achievements on iTunesConnect you can link them using the Game Center Achievement behaviors in GameSalad.

Game Center – Show Achievements: this behavior will PAUSE the game and load the Apple Game Center Achievements window for your game (associated via the bundle identifier).

Game Center – Reset Achievements: this behavior will reset the logged achievements for the current user from the Game Center server.
IMPORTANT: Should only be used when debugging on an ad hoc build of your game and not in the final submitted app.

Game Center – Update Achievement: This behavior will sync up with the Game Center server and update the specified achievement by a percentage increment.

You have probably played games before where you would unlock an achievement by beating a certain level or finding a specific hidden item. This would be a single event unlock, meaning the player would trigger the achievement immediately after this specific single event. These are the easiest types of achievements to set up in GameSalad.

That is all you need to do!

There are numerous ways to set up the Percentage field for proper updating, but the general rule of thumb will be to include an expression like this:
(Total Units / Goal Units) *100

To better explain the equation, imagine an achievement for destroying 1500 total enemy ships throughout the entire game. Each time you destroy an enemy ship you will increment a game attribute (game.shipsdestroyed for example) by 1 and save. In this scenario, you would also have an actor that updated the achievement at the end of the level or even each time the enemy counter increases – the choice is yours. In the percentage field you would put game.shipsdestroyed/1500 *100.

No matter how you set up the division of current units over goal units you will need to multiply the result by 100 in order to create a percentage value that Game Center will recognize.

– First, create a self or game attribute you will use to persistently track your units. This could be for kills, coins collected, victories, etc.
– Then, link up your your corresponding Achievement ID from iTunesConnect in the Achievement ID field
– In the percentage field, use the expression editor to create an equation: (game attribute / goal amount) *100

When you update an achievement successfully it will save automatically on the Game Center servers.

If you wanted other in-game indicators or events to trigger based on an achievement unlock, then you would need some custom saving logic. There are many ways to do this and we leave it to you to implement using your preferred methods.

GameSalad does not communicate directly with Game Center when previewing so it is necessary to publish an ad hoc build of your game using the same bundle identifier that you created the Achievements for through iTunesConnect for testing.

In iTunes Connect you can create a testing email account to log into Game Center with for your test ad hoc build. 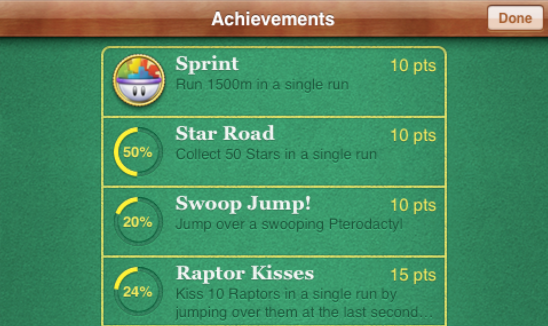